Check out my GitHub! 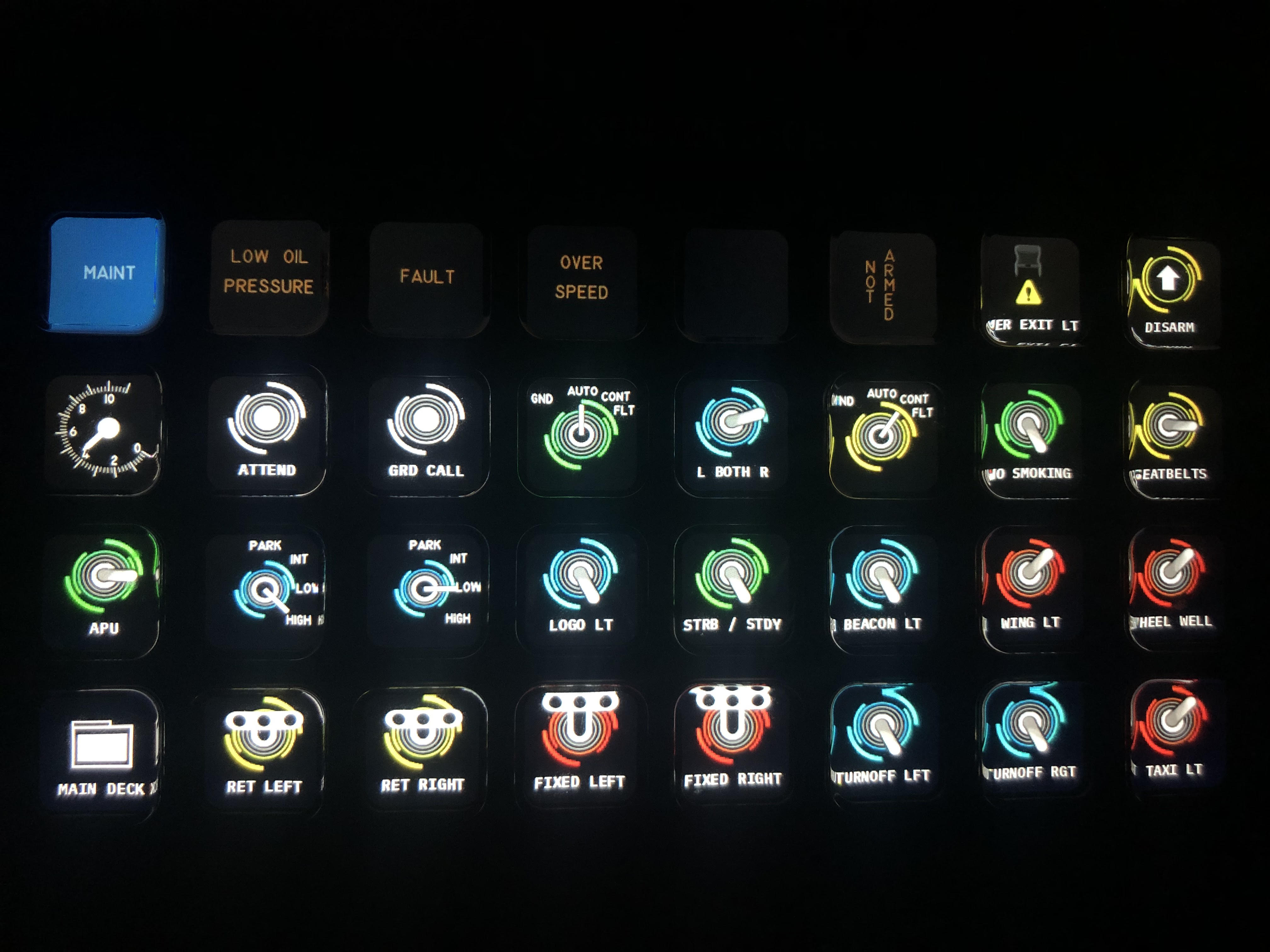 As I was building my dedicated home cockpit for the Boeing 737 NG, I wanted to take away the control of a pointing device as much as possible, control the plane by intuitive way and use the mouse mainly to look around!

So I have built a script that has achieved exactly what I wanted!

The idea of taking mouse from the control of the flight simulator was taken away for me! And in a fashionable, esthetic and inventive way. As a lot of hardware for flight simulation is expensive, this modular and open deck hardware is a convenient solution for physical replicas of real life panels ,and still, they miss the factor of modularity in case you want to switch planes. This is very easy to configure for a regular educated user and can be used for any aircraft model.

It can do practically anything, control buttons by switching on/off, cycling between multiple state knobs, rotating knobs or activating momentary switches by holding them. Of course, it keeps the deck icons up to date with current states with no visible latency! It has gauges (as those are harder to read on the TV for me)... oh how pretty they are. It has folders so there is a lot of space. The Stream Deck XL provides 32 buttons, so there is a lot of room to play with!

It is developed in Python 3, and doesn't need any external plugin except the dependencies of the project. It communicates with X-Plane using its built-in internal UDP protocol, which is simple, yet still powerful tool for projects like this. The main loop is simple and optimized so the performance hit on the precious CPU time is as low as possible.

The source code can be found on my GitHub!

If you want to see more images, take a tour on my personal flight simulator :)

Radar echo prediction done precisely, up to 1hr of of precise vectors

Czech Hydrometeorological Institute came up with a radar echo extrapolation nowcasting algorithm known as COTREC (and later proposed an upgrade called CELLTRACK). I was main developer of the software implementation for Meteopress s.r.o, engineered from scratch. Recreated with passion and multiple additional features :P

The program is developed in Go language and accepts two input images of t and t-10 to determine the default vector fields used for nowcasting prediction. The vector fields are applied to the image of t to determine the next positions of all dBZ values in the t+10, t+20,t+30... time-field. The program recursively divide the domain into smaller and smaller squares, which each one of them is calculated separatedly in the range of the parent square. The algorithm is effective to squares of t and t-10 correlation coefficient down to 0.7 (or similar) and fault-tolerant as it tests the recent correlation of the vector field with past calculations, thus it encodes an output with best vectors (current and past vectors are applied to t-10 and correlated with t domain).

Former project in early days of high school, abandoned. Was still a lot of fun to use and code though

Have you ever thought of how the cryptocurrencies work? A few pieces of software and algorithms that random people run on their computers and are able to reach and mantain worldwide consensus. Well.. I did. And it was so fascinating to me that I wanted a piece of cake too. Not of Bitcoin or any other altcoin. I wanted my own cryptocurrency. So I developed it ;)). I wanted to have my own cryptocurrency, with my own protocol, my rules... and my coins <3. Since Proof-of-Work is a vulnerable approach (51% attack) to weak cryptocurrencies, I am developing more convenient proposal of my protocol to make users able to set a delegate to vote on their behalf regarding the network status with their stake (Delegated Proof-of-Stake), thus creating an effective and low-cost approach to reach a consensus for a private distributed network with low bandwidth and user count. This makes it possible to be secure and low-cost.

The project was in development for few years and there were some prototypes in use, but this was supposed be the third and was hoped to be the most robust private semi-centralized cryptocurrency network created in my lab. The cryptocurrency is not and most probably be not perfect, so if you have any kind of proposal, I would very like to hear it from you. I also realized that a key factor was to make it fun to use for my friends/coworkers/family/whatever, Since I wanted to distrubute the coins without the mining process, I said: "let's make issuing coins fun!" - minting coins through website/mini-games/basically-anything with secure timestamping to prevent rapid inflation.

The project is currently suspended, as my expectations and hopes for the projects exceeds the time I could put into it right now alone... Still, if you would be interested, I can share some source codes and programs for it with you. Contact me and we can take a look at it :)